a shrapnel bomb was left in a car in the parking lot of my bank back in january. the short version is that it was left on a sunday night and then the police were lured there by  a call reporting a disturbance (or something) BUT due to a civilian being in close proximity, whomever was meant to push the button did not push the button and instead, left. the people responsible then phoned the police and said they’d left a bomb in the area, but didn’t say exactly where (bastards).

that was sunday night. the police didn’t find the car until tuesday AND THEN they found a nearby grenade trip-wired to a child’s bicycle… *sigh*. what could have happened is a very scary thought.

once everything was located, it was all dismantled and disposed of and whatever, and that included a controlled explosion – blowing up the car where it sat.

you can see more pictures here

and some articles here: 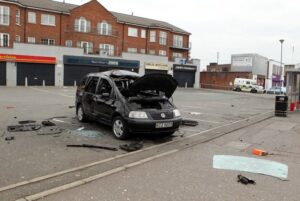 so yeah, this kind of thing actually happens on a quasi-regular basis here in belfast, and around northern ireland (you can read about the Troubles here) but this is the closest a ‘viable device’ has ever been to me (less than a mile). i must say that while this was actually happening, i was blissfully unaware and in my own safe little world here at the house. the pictures in the post are not mine, and i didn’t see any of  it, not even a little bit.

i was *that* far removed.