this is my favourite knit hat. i wear it alot, and i do mean ALOT. i’m not kidding, this thing is on my head ALOT. 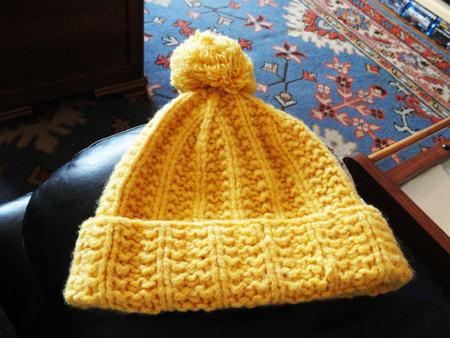 husband doesn’t seem to mind. i think i wore it for three weeks straight without him even commenting on it… except for that time when i ALSO wore my yellow hoodie and he called me Colonel Mustard but hey, it WAS a little matchy-matchy, and hubs has always called ’em likes he sees ’em (it’s partly why i married him).

it’s an abercrombie & fitch hat but even though that’s [meant to be] a [so-called] desired [not by me but by others] brand, i’d really almost rather it wasn’t because see, being pseudo-pretentious, i have preconceived pseudo-notions about people over the age of 25 who wear A&F… and hollister too… yaknow, since i brought it up. heh.

(but to be fair, it takes one to know one)

the hat came with a ten foot matching scarf but i don’t wear it. it’s FAR too bulky for my shortarse and to be perfectly honest, when i wear the hat AND the scarf, i kinda look like a corndog… literally AND figuratively.

does anyone want a FREE bigass A&F mustard yellow knitted scarf? it’s really nice and has fringe. if you’re in the UK, i’ll post it to you. if you’re in the US, you’ll have to wait until i’m there in august (or you can paypal me the s&h). let me know in the comments. first come, first served. i promise i won’t judge you 😛

so yeah, the hat’s saving grace is that the only branding is on the label which is inside that hat and therefore not at all visible while the hat is on my head which, i might have mentioned, is ALOT.

i freakin’ LOVE this hat.