this might not be terribly interesting to some of you, but i’m fascinated (and not at all surprised) by this kind of stuff. after reading up about it, i now subscribe to the [respected] theory that prairie dogs have a complex language consisting of unique and specific chirps/barks that they use to communicate.

so, for a group of sounds to be considered a language, it is generally accepted that “it must contain words with abstract meanings; possess syntax in which the order of words is part of their meaning; have the ability to coin new words; be composed of smaller elements; and use words separated in space and time from what they represent.”

it appears that the prairie dogs are well within these parameters, and are quite possibly better at it than dolphins… and in some aspect(s), humans.

here’s a BBC article about it but SURELY it’s not restricted to north american ones.

…and here’s another article about it

below is a crop of the prairie dog photo i took at the belfast zoo the other day. obviously the ones at the zoo don’t feel particularly threatened by much of anything and in fact,  we were like the buzzing of flies to this one! it couldn’t have cared less, really. they’re awfully cute though 🙂 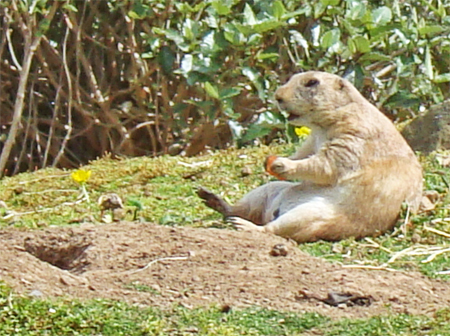