i’m going to try this soon, and if it’s as good as it looks, then this will be the starter at my next dinner party: 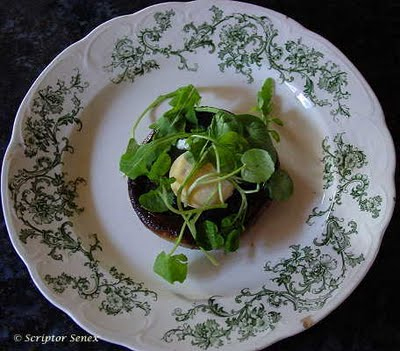 prepare the micro-salad by putting a mixture of rocket, spinach and water cress in a bowl. in a separate bowl, put two teaspoons of white wine vinegar, a teaspoon of mustard, a tablespoon of olive oil, some freshly ground black pepper, and sea salt and mix well. pour over the micro salad and toss lightly

gently fry the mushrooms in butter.

in a large pan heat water and add two teaspoons of white wine vinegar. swirl the water around in the pan until it has a momentum of its own. carefully drop the egg yolk in the centre of the water and cook briefly until lightly poached.

serve the mushroom cap-down with the egg yolk on top and then loosely drape the micro salad on top.

i found this recipe and these images here

i mentioned jello shots but when does one present jello shots at a dinner party.  as the guests arrive? after dessert but before the cheeseboard? (tee hee!) …and while i’m asking questions, do jello shots count as a drink?

eh, who cares. even if it’s not a dinner party, i’m pretty sure i can come up with a great excuse to make these. my mouth is watering just thinking about them.

That’s so Michelle is a different michelle by the way. it’s not me -the name is just a coincidence. i found her site just now while looking for a good jello shot recipe. she’s got alot of fancy-pants recipes, and i do like my pants to be a bit on the frilly side 🙂