mmm… i love food. like, i really love really good food (as evidenced here and here). by “good food”, i mean fresh foods, and/or exotic foods, and/or unique combinations. i’ve been accused of being willing to put just about anything in my mouth. this is not true, but i AM a tad adventurous – at least relatively speaking because, see, my husband will [mostly] only eat food that he’s eaten before, and he’s not particularly keen on trying new flavours. at least i don’t have to worry about anyone eating my courgette fritters or stuffed cabbage, etc.

like everyone else i know who is on pinterest, i’ve got a few food things on one of my pinterest boards, called “gastro” (which you can see here), and i try to make something from that collection at least once a month. i mean, why pin recipes if you’re not going to ever try them? for intance, i’ve made the crusty parmesan zucchini, the grilled capresi sammich, the cauliflower chowder (except i modified by replacing the celery with spinach and mushrooms because i DO NOT like celery), and i can heartily recommend them all.

a couple of the recipes that i’ve pinned have inspired me to be more creative and put together some flavours that i might not otherwise have thought to combine, like this salmon carpaccio-ish dish (loosely based on this recipe) that i’ve now had multiple times because it literally takes minutes to make and is really really tasty … 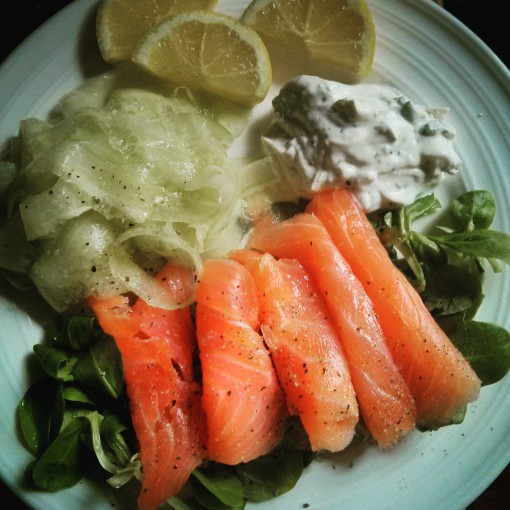 smoked salmon, cucumber ribbons and lamb’s lettuce with freshly ground black pepper and sea salt, lemon squeezed all over, and a side of tzatziki (because i didn’t have aioli)

so as i was saying, i like to try a new recipe now and again. this time i got the handful ingredients for hummus and avocado quesadillas (pinned from this website), modified it a little bit to suit my taste, and jumped in with both feet. it was sooooo goooood! even if i do say so myself, which i do.

i didn’t measure out the ingredients, partly because there aren’t really that many ingredients to measure, but mostly because i tend to throw things together with fortunate results. here’s what i did.

first i plopped a couple of large spoons of hummus on a plate, sprinkled it with cumin (which is kinda strong, so i was careful to not over-do it), grabbed a large pinch of cilantro and coarsely chopped it (note – in the UK the seeds and the greenery are both called coriander. for this recipe, it’s the leafy bits). then i cut a small avocado into slices, and broke off a bit of feta from my block. 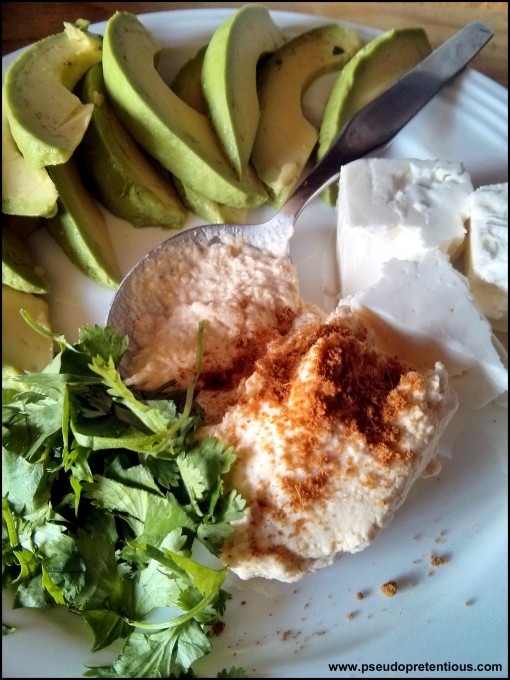 then i haphazardly mixed the hummus, cumin, and cilantro together, and split it between two flour tortillas (6-8″ diameter or so), spreading it on half of each tortilla. i divided and placed the sliced avocado on top of the hummus mixture and then crumbled feta over the avocado.

after i got them prepared, i folded each tortilla in half and placed in a hot pan that i had only barely oiled. once one side had browned, i carefully flipped them and browned the other side. 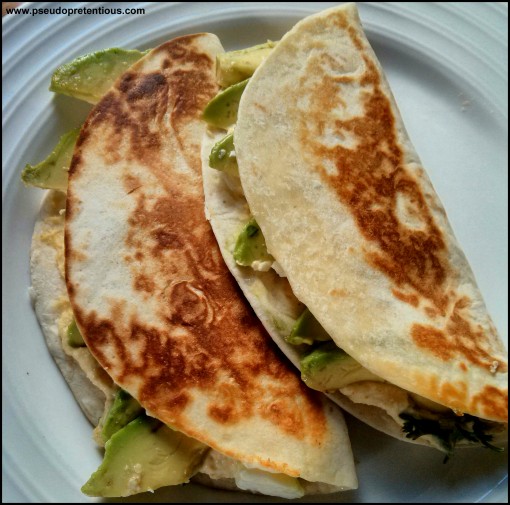 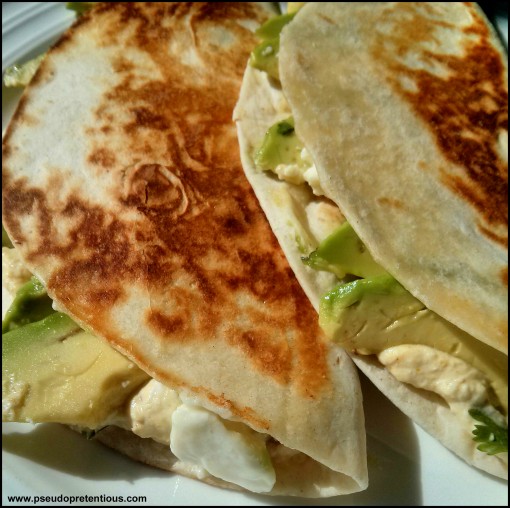 the tortillas were nice and crispy, and the flavour combos were just right. i think the cumin really added some zip to them, and i don’t think they’d have been nearly as good without it. the only addition i might consider is some chopped and seeded tomatoes, and maybe just a hint of freshly minced onion (but that might change it to guacamole and hummus quesadillas, huh?)

anyway, this recipe is definitely a keeper, and a nice addition to my repertoire 🙂

7 thoughts on “avocado and hummus quesadillas”