this story may or may not contain a bunch of long-ass sentences and different tenses. i’m writing it down as i would tell it aloud (as i do).

so i went into the house today after doing a bit of gardening and was mildly startled to find approximately 75 pounds worth of a wet akita dog very curiously sniffing everything in the front hallway/foyer.

fortunately i’m not afraid of dogs and was all like, “well hello there! c’mere puppy, you’re not supposed to be in here…” but i was mostly ignored and it went into my mum in-laws living room and had a good sniff around in there, then passed by me and went into the kitchen, via the dining room. at this point i yelled up the stairs to husband and said, “THERE’S A DOG IN THE HOUSE”, and he yelled back, “OK” and came downstairs and we shut the door between the dining room and the kitchen, quickly removed a pack of sausages from the counter before the dog could grab them, and opened the back door. after just a couple more sniffs, the wet akita went out the door and took a right to go into the back garden. we spied our cheeseburger kitty so husband went to grab him and put him safely in the house… 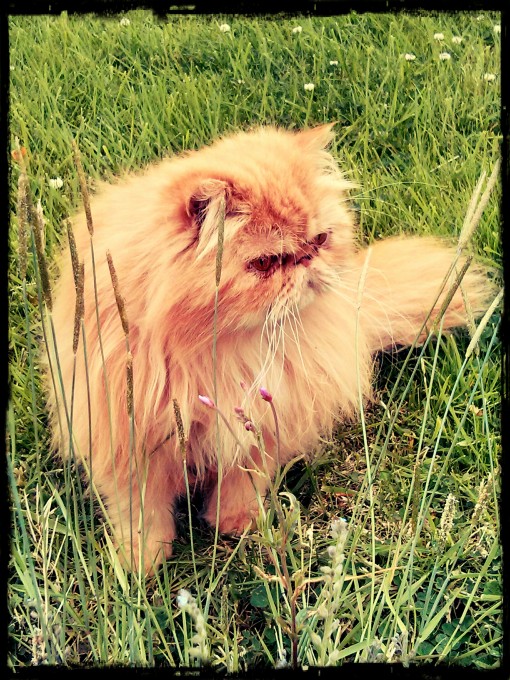 we have another cat named bucket, but we weren’t worried about him because he’s… well, he’s bucket, and he’s not afraid of some silly 75 pound dog. 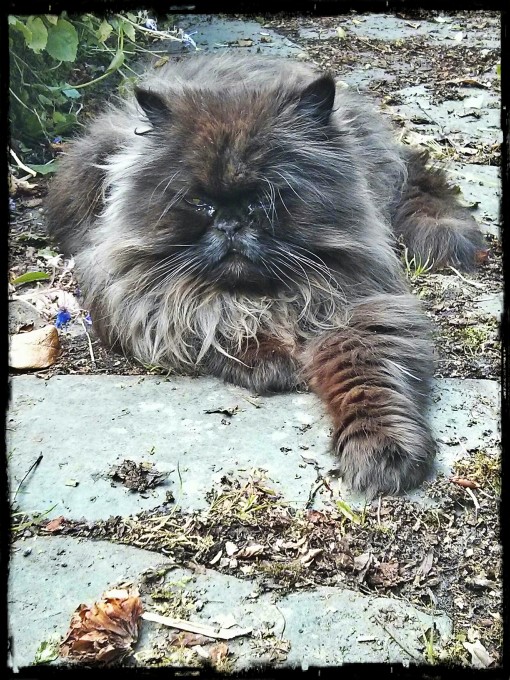 bucket has no fucks to give

i followed the dog around the corner because it was headed towards where i last saw my mum in-law working on one of the hedges. she had since moved up closer to the house so the dog had already bumped into her by the time i got around the corner but fortunately she’s not afraid of dogs either and had thought at first that it was the neighbour dog suki, but then quickly realised that it was a different colour, plus suki is a husky. this is suki. she looks subdued but she isn’t: 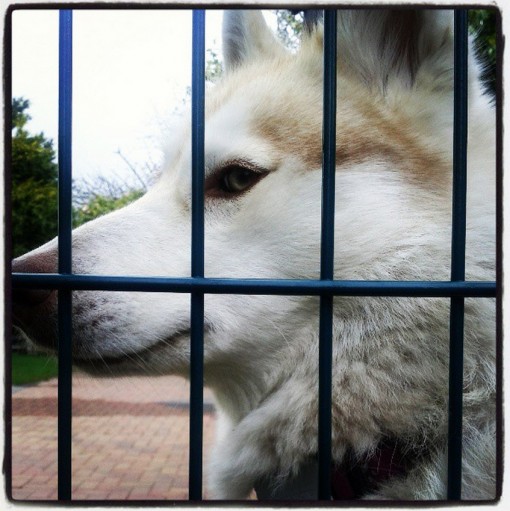 the sweetest neighbour dog ever

so, my mum in-law suggested i go to suki’s house (sean’s house, really) and ask if there was a spare collar and leash around that we could borrow (there was, plus they gave me a couple of tins of food) and by the time i got back outside, my mum in-law and three other people were standing at the driveway of the house two doors up from us, and quite near the busy antrim road, looking concerned. i went over and the dog was very happily running around the garden but she (i had decided it must be a she because i had not yet seen any doo-dahs or floppy bits) came to me when i called her. i tried once to put the collar on and the wily bitch dodged me but i’m also a wily bitch and i got it on her on the second try. i clipped the lead onto the collar and then had all 75 pound of wet akita under my control.

she’s bigger and wetter than she looks in this picture.

she was really well taken care of –  you can even see in the pic that her nails have all been recently trimmed – but she had no collar of her own and so we had no obvious way of getting her back home. my mum in-law called the police and some incredibly unhelpful asshole answered and was incredibly unhelpful (and an asshole) and said the dog warden wouldn’t be available until monday, and today is only saturday. i went back next door to suki’s house (sean’s house, really) and asked sean if suki might be interested in having a friend stay for the weekend and he was… well, let’s just say he was reluctant. i gently pressed him for another minute or two before he broke and offered to see if the two dogs would get along, but then the neighbour on the other side of him said she knew a woman that takes in found dogs so she took the akita to her house… *whew*. thankful that he didn’t have to dog sit over the weekend, sean even threw in another couple of tins of dog food and a wee bag of snacks to tide them over until someone came to pick up the dog.

i then continued gardening for about an hour and then went back in. my mum in-law had been unsatisfied with the information relayed to her by the previously mentioned unhelpful asshole, so she had called again and got an extremely helpful young woman who took her number and address down, said there IS an after-hours dog warden available in our district, and that she would pass along the information for her, which was FANTASTIC. i went two doors down to relay the information and there was even better news. the woman that takes in dogs also works at a vets office and had access to a chip reader. she had already been by to see the dog, the dog WAS chipped, the chip registration company would only tell her the dog’s name but not the owner’s address but it just so happened that she thought she recognised the dog from the office and when she heard the dog’s name, she then knew who her owners were. she loaded the dog up and took her home. all’s well that ends

her name is faith, she lives with a family with children, and she’s about three years old.