note – this is sort of a continuation of a facebook discussion that was had on my page. 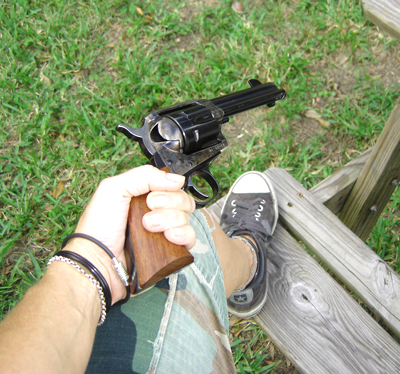 i own a selection of firearms. i have a considerable amount of training in the use, care and respect of/for them AS SHOULD ANYONE THAT OWNS OR HAS ACCESS TO WEAPONS. you’ll never see a photo of me “playing” with guns. you’ll never see my finger on the trigger unless i plan on pressing it. the only time i would ever, EVER aim a firearm at another human being is if i felt that my life or the life of another was in danger, and if i ever feel like i need to aim a firearm at another human, i’m prepared to fire it, and if i have to fire it, i’m going to empty it… and i WILL reload. that’s the way i was taught and that’s the way i believe… and that’s just the way it is.

here are some photos that i’ve taken over the years. some of the firearms are mine, some are my dad’s, some are other people’s that they’ve let me use or even just look at (like the colt .45, above. it’s not mine, i just got to touch it for a while). after the photos, i’ll tell you a story about a time when i believe that my personal sidearm saved my life, or at the very least kept me out of harm’s way

let me know if you have any questions. the comment section is open. 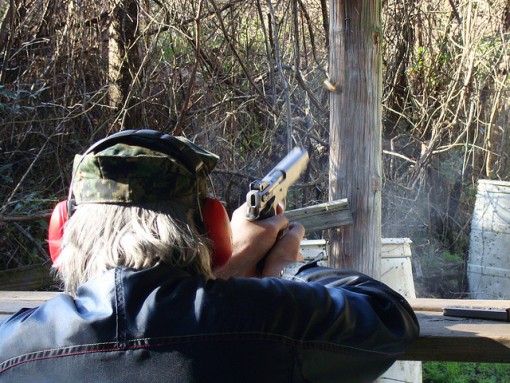 my dad firing his smith & wesson 10mm at the range. i snapped this at just the right time, as you can see the casing being ejected and the smoke from the muzzle blast. notice the sound suppressors. you can’t tell from this photo, but he’s also wearing eye protection. that’s just how we roll. 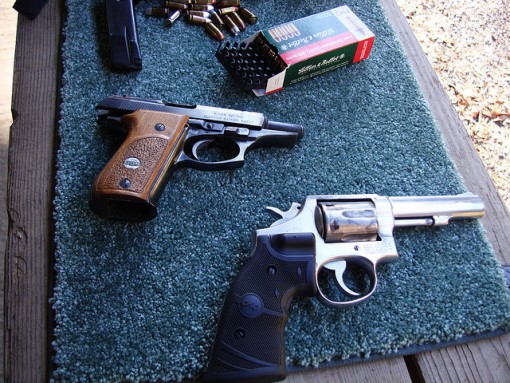 that’s my bersa .380 model 85 with the walnut grips. this was taken at the range 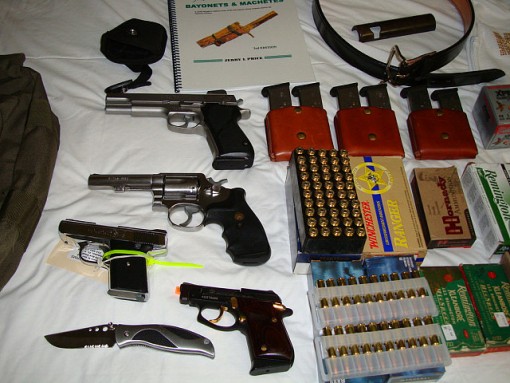 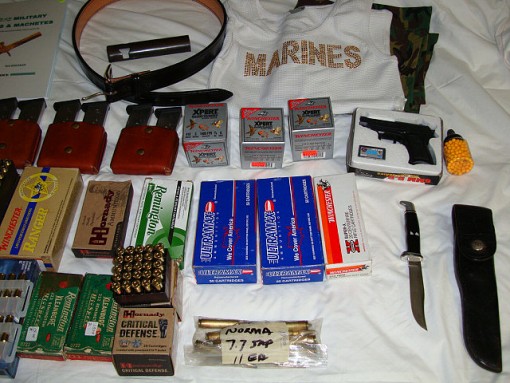 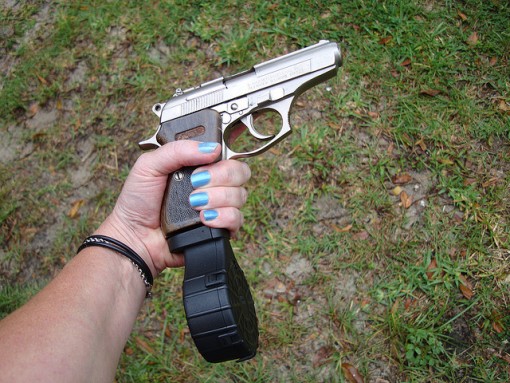 bersa .380 thunder with a drum magazine 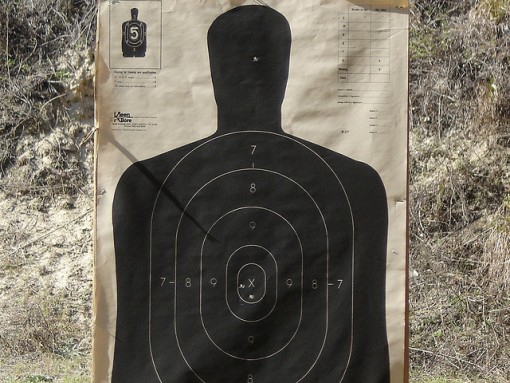 my first three intentionally placed rounds one day at the range… “two in the chest, one in the head. we’d like ’em alive but we’ll take ’em dead.”

empty shell casings on the ground at the range. tsk. you should always pick up after yourselves, people. 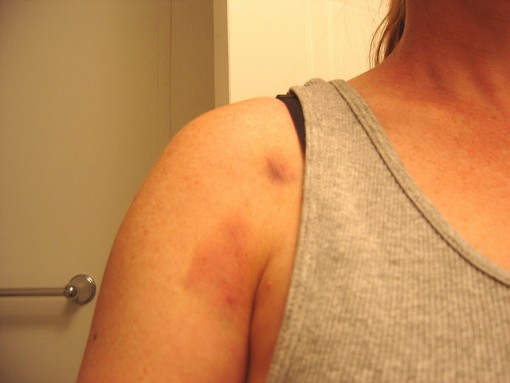 my shoulder bruise from shooting clays with the 12 gauge riot shotgun, 2 3/4″ shells. it wasn’t that i was shouldering it wrong, i just bruise easily. 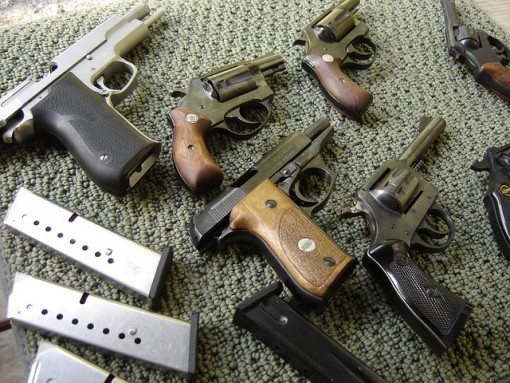 the target next to the sign is staged because i thought it was funny. this is my target – the head and neck shots were with the smith & wesson 10mm, the chest shots were with the  bersa .380, all at 21 feet. i’m an excellent shot (even if i do say so myself, which i do!)

so, that’s it for now on my photos – here’s the story i promised you.

one night when i was in my mid-20’s, i was the designated driver for a group of friends that wanted to go out and party. after i got everyone home around 2am, i still had another 25 miles to drive but i was hungry. i stopped at a local all-night restaurant and got some food and hit the road. i decided that i didn’t want to wait until i got home to eat because my food would be cold plus, as i said, i was hungry, so i pulled over into the middle of an empty shopping center parking lot/car park right next to the main road, under a streetlight, and started eating.

at one point i looked up and saw three people walking from around the corner of one of the shops approximately 100 yards from my car. i ate another couple of bites and looked back up and they were AT MY CAR. they walked up to the driver’s side door and said, “what are you doing?” they weren’t leaning down looking in the window, which was rolled down maybe 4 inches, they were standing right up against my car so all i could see from my point of view were their t-shirts. i replied, “i’m eating my breakfast. move along.” and one of them said, “i’ve got something you can eat”, and at the same time i heard the passenger door handle being lifted and my adrenaline kicked in.

fortunately my doors were both locked, as usual, but with the driver’s side window rolled down those few inches, it would have been very easy to smash it in. my first instinct was to flee so i threw my food into the passenger seat. the keys were in the ignition so i didn’t have to fumble for them, and i started the car. a split second later, i remembered that my pistol was in the glove compartment so i opened the compartment door, grabbed my holstered pistol and the three boys ran for their lives.

from the time that the passenger door handle was lifted to the time i opened the glove compartment and got the pistol out was about 4 seconds. that’s all it took to convince them to leave, was seeing that i had a pistol. i didn’t even unholster it. now, i don’t know what they were up to, but the fact that two of them distracted me while the third tried to gain entry to my vehicle with me in it, at 2am, was enough evidence for me to know that whatever it was, it wasn’t in my best interest. it think that it is quite possible that, if i didn’t have my pistol with me and accessible, and if i hadn’t been able to think so quickly, i might never have been seen alive again after that night. 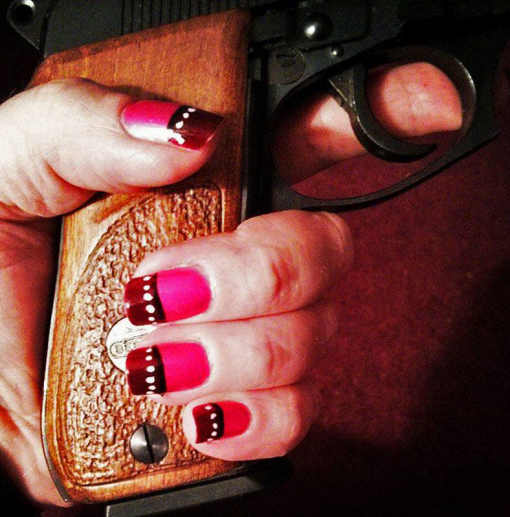 so yeah, i own firearms. i know how to use them. i’m not scared to use them, and i’ll make no apologies.

…and my fingernails are fantastic.