i went home to FL in october to see my parents. i go twice a year (hence “biannual” in the title of this post. meow.) and this year my visits were planned around my mom’s two hand surgeries. she had thumb joint replacements in both – her left hand was done in april and her right one was done in october. i got there a week or so before the second op and so we did a few things before she got all cut up and hog-stitched. this is an earlier post i made with pics from our day trip to the gulf coast. i forgot to mention in that gulf coast picture post that we ate that day at the [locally] iconic Roy’s Restaurant and sadly it was nothing like either of us remember but hey ho, oh well, whatevs.

…and then a few days after we had gone to the gulf, she had her surgery. i think this photo is about 4 days after the surgery… *shudder* 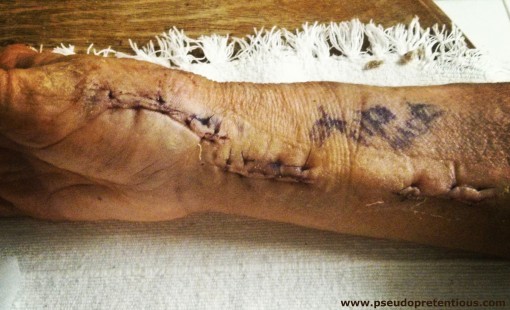 do you see why said “hogstitched”? it looks icky, doesn’t it…? bleh. to be fair, the stitches are actually very well done and you can barely see the scars on the other arm from 6 months earlier, and it was the same surgeon who was awesome and kinda looked like maybe he was secretly beau and jeff bridges’ brother, which i told him as soon as i thought it.  i changed her bandages every day for the first couple of weeks after, until the stitches came out and the stitch holes healed, and i only felt vommy a couple of times.

i was in FL for quite some time but i didn’t get out to see many people. my intentions were good but i failed to make it happen and to those people that were kind of expecting me, i’m really sorry. please don’t give up on me. i really do love you guys and i hope you all know that…

moving along, there were still some flowers in bloom when i was there this time, but i only got a few pics of them (i will, however, get a shitload when i’m there next spring). my ma loves her wildflowers. 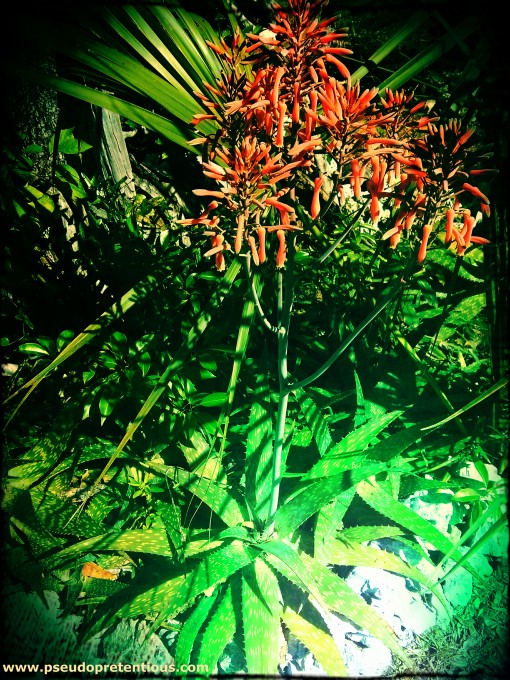 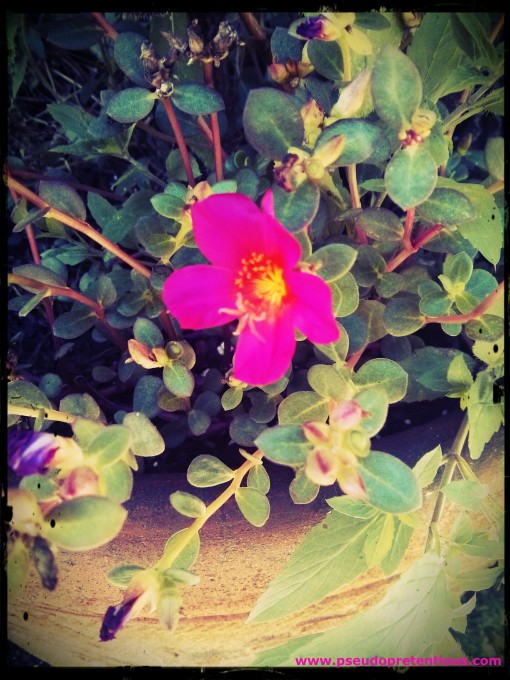 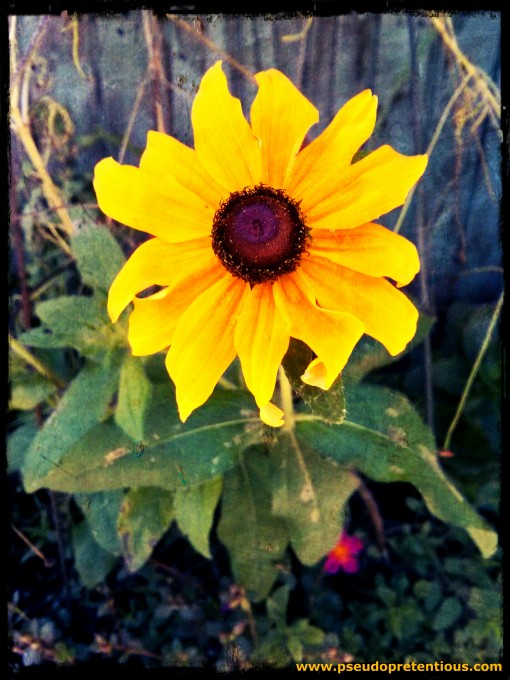 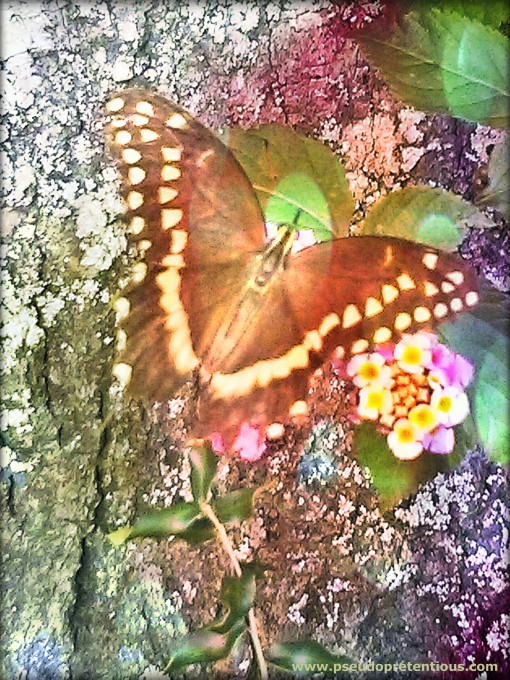 there seems to be a lot of vultures around my hometown these past few years. i dunno if it’s a recent thing or if they’ve been there all along, but i certainly don’t remember SO many being around when i lived there. this is the dead oak tree on the property behind ours (where the Crazy Lady lives! some of you know whom i mean), slam full of vultures, which was a daily occurence: 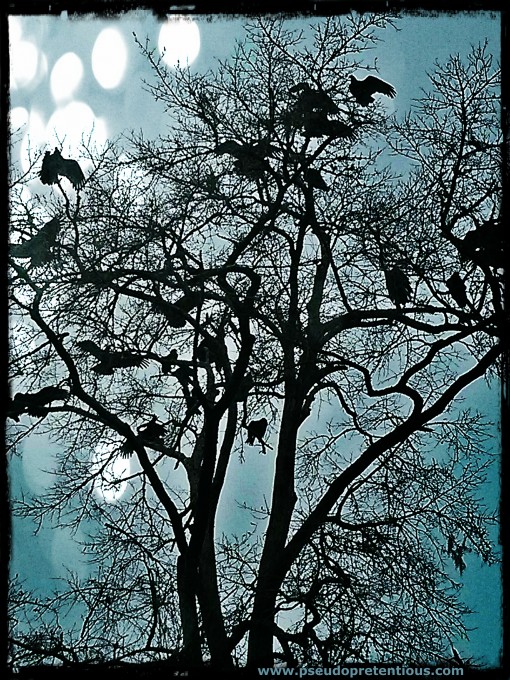 …and on one of the only two cold days we had while i was there, i found a sluggish anole (lizard) in the door jamb of the van i was getting ready to take out so i picked it up to relocate it and it managed to twist around and bite me (it doesn’t hurt at all) plus it did that throat thing to intimidate me (it didn’t work) but i had to wait for it to let go on its own because i didn’t want to damage its little teeth by wrenching my finger out of its mouth grip – their little teeth are delicate. fyi, that’s a lizard leg across my thumbnail. i don’t have creepy, dirty nails thankyouverymuch. 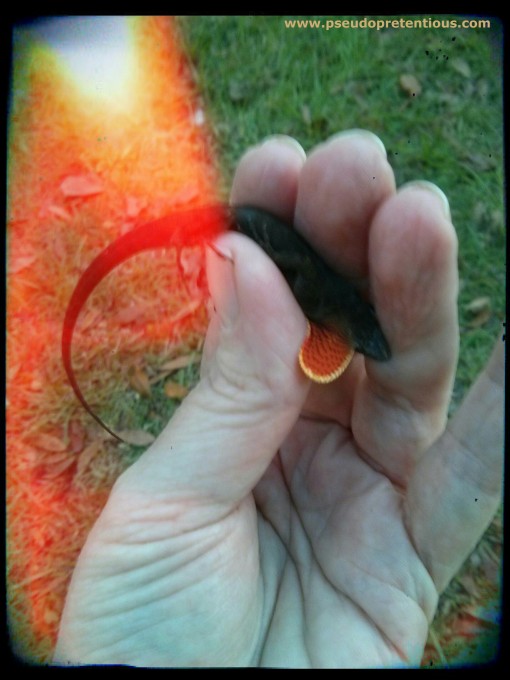 …and i got my hair cut while i was there. it used to look like this (YARRR!) 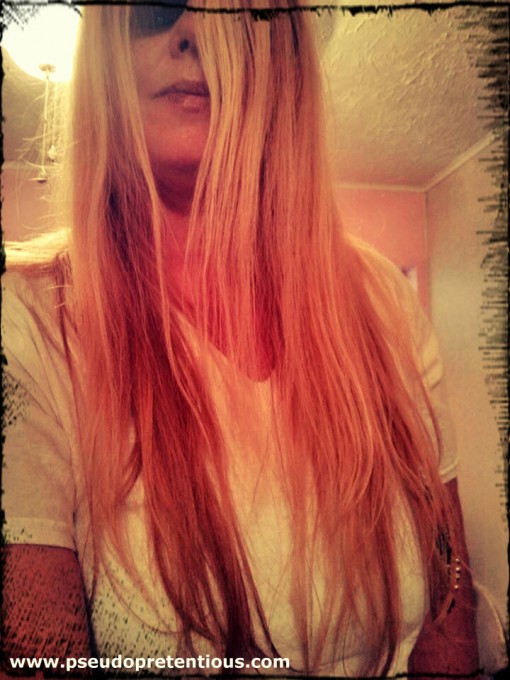 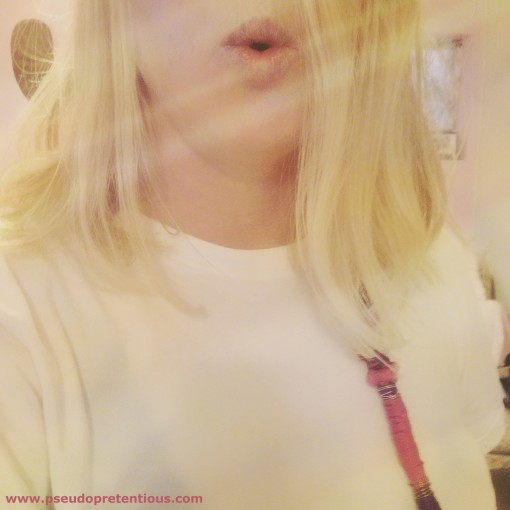 my hairdresser (SHANNON!) said it was easily 13″ that she very eagerly chopped off my head. maybe a little too eagerly… heh. just kidding. i frickin’ love it. it’s refreshing.

oh, and here is a picture of a vicious pitbull named dixie doodle (i jest, she’s THE SWEETEST) and a giant cat named latte, who are part of my aunt and uncle’s pack of animals (which consists of 4 dogs, 2 cats, and a handful of yardbird). as soon as i sat down on the couch, dixie got up beside me and snuggled next to me with her head on my leg the whole entire time i was there. dixie kept trying to snuggle closer to me (which was physically impossible), disturbing latte’s lounging, which is why latte looks slightly annoyed in this pic.

lastly, but certainly not least[ly], this is a stunning deck of cards that was given to me by my dear friend mm2. they’re GORGEOUS, aren’t they?? 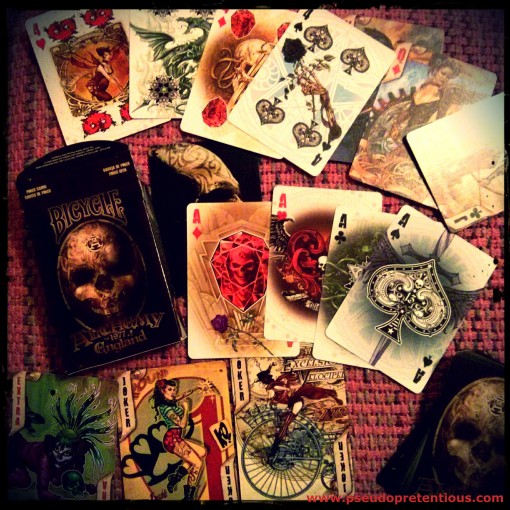 right, that’s all i’ve got for now but i’ll post again soon.

3 thoughts on “my biannual pilgrimage home”